We interviewed SWSO’s founder, Halima Farah Godane, to learn more about her organization and her current projects.

WHAT ARE YOU CURRENTLY WORKING ON?

We are basically working on four major projects now. One of them is strengthening women’s participation in peacebuilding, which was launched in Kismayo, Somalia in May 2016 through a partnership with the Life and Peace Institute. The other project that we are implementing is Restoring Stable Communities in Somalia, which was launched in early April 2017 through our partnership with Saferworld.

The third project we are dealing with currently is the Village Saving and Lending Association (VSLA), which was started late last year in partnership with Peace Direct. This is a saving scheme that has been initiated in the community and targets three hundred women with small businesses. The program is intended to benefit the women who were initially trained on peacebuilding by improving their livelihoods. The project is going well, and many women have taken it as an opportunity to expand and increase their business operations.

Finally, in February 2018, GIZ commissioned a rapid market survey on processed milk products and businesses in Kismayo. With support from GIZ, SWSO aims to further the development of the milk supply chain and to facilitate additional income generation opportunities for women and youth processing milk. This will be done by helping business groups to process milk into different dairy products, including sour milk, flavored milk, butter, yoghurt, and ice cream. With the financial support from GIZ, SWSO will form business groups, who will be linked with the current milk vendors so that they can buy leftover milk at the end of each day to be processed into the above products. This will reduce waste and create additional income for select groups.

WHAT IS THE THING YOU WANT TO CHANGE MOST IN THE WORLD?

The thing that we want to change most in the world is to make the world a peaceful place for all, regardless of race, tribe, religion, or nationality, so that every individual can freely express themselves without fear of prejudice. I would want to make strides to ensure women have their say equal to men, especially in patriarchal societies where the voices of women are suppressed.

WHAT KEEPS YOU UP AT NIGHT?

What keeps me up at night is the thought of how to improve and increase women’s full participation in decision-making and support girls’ education. Women are very important actors, and there is need to include them rather than maintaining their silence as tokenistic representatives or sidelining them in important decisions.

I am also worried about the lives of returnees and IDPs [internally displaced persons] because they live in deplorable conditions with poor hygiene and sanitation. They are highly disadvantaged and remain in poverty having little access to social services like health and education. Therefore, there is need to prioritize their needs. 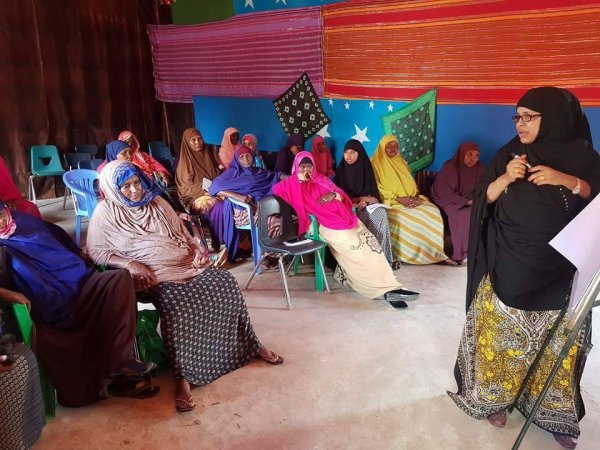 WHAT HAS SURPRISED YOU THE MOST ABOUT THIS WORK?

What surprised me most about this work is that, as an organization working with women and their interests, we never thought women could work on peacebuilding and conflict resolution. In Somali tradition, it is taboo for women to be active participants in decision-making, peacebuilding, and many other things as they are reserved for elders and important men in the community. After we mobilized and educated women about gender equality and peacebuilding, we also created a platform that will overcome this issue. Then women decided to take immediate action and settled a dispute between two rival clans that had been fighting over pastureland.

This was solely done by women as part of a peace platform that consisted of thirty-nine (39) women who visited the area where the conflict had occurred and immediately arranged two days of dialogue between the two clans. They successfully solved the matter, which was witnessed by the various clan elders and leaders, who appreciated and lauded the women for a job well done! The women taking part in such an important matter has really surprised not only us but also other members of society. We have recognized from our work that women can indeed make important decisions and take action if only they are given the space and capacity to do so. Our leaders have resolved to support women-led initiatives after they saw that, what men can do, women can do better.

WHAT SHOULD WE PAY ATTENTION TO NOW?